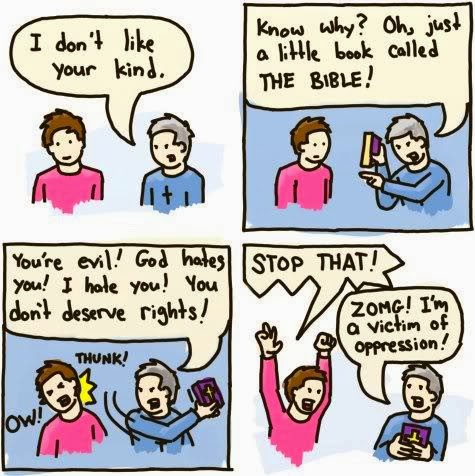 This demonstrates what the repulsive "Freedom To Discriminate" law being pushed in Arizona, along with the people advocating for it, are actually doing. Enshrining discrimination into law. Enshrining the right to hate, and punish, people for simply being who they are, into law.

It's monstrous. Who exactly are the evil ones here? Certainly not LGBT people, who are simply trying to gain the same rights heterosexual people have taken for granted for centuries. The right to marry. The right to form families. The right to live out their lives and participate in their society, free from prejudice.

This should not be threatening to any religious person. Another person's marriage, and another person's life, has nothing to do with yours, and your God loves all people, after all. The fact that the supporters of SB 1062 are trying to put forth the excuse of "religious freedom" to deny basic rights to anyone who falls afoul of a "sincerely held religious belief" (in much the same way as "Stand Your Ground" laws provide an excuse for murder), says a lot about them, none of it nice. They know they are losing the war against gay marriage; the dominoes of the states are falling, sometimes daily. Justice Scalia, much to his chagrin, laid the groundwork, and sooner or later (probably sooner) laws and amendments against same-sex marriage will go the same way as laws against interracial marriage, along with dodos and dinosaurs. Total extinction. It can't come soon enough.

So instead, knowing they are destined to lose, these people are taking refuge in the flimsy defense of "religious conscience," to perpetuate the same discrimination under another name and via another means. What a pathetic, twisted group of losers.

I used to call myself a Christian. Maybe I still am, in a sense. But I also know what "persecution" really means, along with George Takei and his family, Anne Frank and her family, Black Kettle and the Southern Cheyenne at Sand Creek, the Waldensians, and Hypatia of Alexandria.

If "oppression" means I have to 1) "Do unto others as I would have them do unto me," as the man whose example I claim to follow commanded (Matt. 7:12); 2) "Judge not others lest ye be judged," as the same man also stated (Matt. 7:1); and 3) "Make it your aim to live quietly and mind your own business," as advised by one of this same man's most prominent apostles (1 Thess. 4:11); then I think that's a burden I can bear.

If "persecution" means I must 1) Follow the laws and Constitution of the country I live in; 2) as a businessperson, extend service to gay people/people of a religion I don't agree with, just as I would want a pagan, atheist or Muslim to extend service to me; and 3) treat all people, no matter their ethnicity, color, or sexual orientation, as the same children of God and equals in this government's sight, then I can damn well suck it up and do it. If there is to be retribution, that's God's business, not mine.

But if those last two examples are truly "oppression" and "persecution," as opposed to the former....