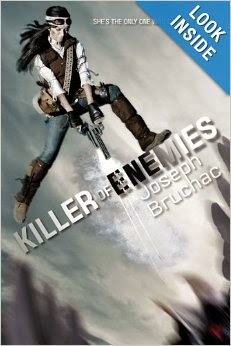 This is my first book of 2014, and man, we have hit the ground running.

In an earlier review I spoke of how refreshing it was to have a person of color, with a culture outside the United States, as a protagonist. This book continues that trend. I'm glad to have found it (Janni Sinner on Livejournal originally pointed me to this book in my Friends feed--before then, I'd never heard of it), but it's sad, and infuriating in this day and age, that such heroes are few and far between.

So here's another one, and I savor it. I love love love the fact that the hero, Lozen, is a Native American woman of color, a Chiracahua Apache and a relative of the 19th century Apache warrior woman Lozen, sister of Victorio and a member of Geronimo's band. (To my mind, this qualifies as being "outside the United States," since the Apache people were here long before the European invasion.) I love love love that the story is steeped in Apache culture, history and religion, and the author deftly weaves this through his story with fascinating, gentle tidbits, eschewing infodump. The future Lozen fully embraces all three aspects of her heritage, and indeed relies on them to survive.

This is a post-apocalyptic, post-industrial world, made so by a mysterious "Silver Cloud" (whether a sentient being or some sort of weapon is never decided) that took up residence in Earth's atmosphere, destroyed the power grid, and fried all electronics. Before the Cloud came, humanity was dominated by three gigantic corporation/states, and genetic engineering and nanotechnology ran rampant. The former leads to Lozen's fame and forced assignment as a "Monster Slayer," hunting down the gigantic "gemods" that inhabit the Southwest and wreak all sorts of bloody havoc. She does this not because she volunteered, but because the four batshit crazy overlords of Haven, a former prison complex, have kidnapped her family and are holding them hostage.

Lozen is very good at her job, and kicks all sort of human and gene-modded ass, killing, among other things, Monster Birds and Super Snakes. (Not with her bare hands, mind you--maybe electricity doesn't work, but guns and grenades still do.) She is also developing telepathy and other psychic powers, like her famous relative, the original Lozen. This creates a rather hilarious subplot where she mindtalks with something she isn't sure is a friend or an enemy, which turns out to be--get this!--a Sasquatch, Yeti, Bigfoot. When I first read this, I groaned, but as the story went on, Mr. Hairy Ally--"Hally," Lozen dubs him--definitely grew on me.

Lozen is just a marvelous character. She's a killer, a guerrilla warrior, and freely admits it. She's blunt and harsh, but given the story's background, she couldn't be anything else. She does soften just a bit at the end, with her love interest (though the romance is definitely on the back burner) Hussein.(Another non-American person of color! Yay.) She's fiercely loyal to her family, and goes through hell and high water to get them out of Haven. She's not much of a talker; she thinks and plans, and relies on her brain and training to get her out of tight spots.

This book would make a great, great movie. But I doubt if anyone in Hollywood would have the balls to run with it as it is, with a proud Apache woman as the hero.