Wanker of the Day

The NRA. Of course.

Except, well, that's not even true.

This is based on the fact that the online directory for Sidwell Friends lists 11 people as working in the Security Department. Five are listed as “special police officer,” while two are listed as “on call special police officer,” which presumably means they do not work full-time. The directory also lists two weekend shift supervisors, one security officer and the chief of security.

Under the District of Columbia General Order 308.7, a special police officer is a private commissioned police officer with arrest powers in the area that he or she protects. They may also be authorized to bear firearms — but it is not required. Security officers, by contrast, cannot carry firearms and in effect are watchmen. So five to seven security personnel in theory could be licensed to carry firearms.

But we spoke to parents who said they had never seen a guard on campus with a weapon. And Ellis Turner, associate head of Sidwell Friends, told us emphatically: “Sidwell Friends security officers do not carry guns.” (Note: this includes those listed as special police officers.)

Kee-ripes. These clowns can't even get their false accusations right. The article gives the NRA "Four Pinocchios," which is the equivalent to a "liar, liar, pants on fire" rating. 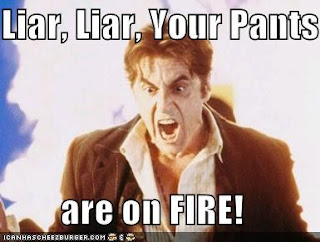 The NRA has a serious credibility problem, and stuff like this isn't helping.

Email ThisBlogThis!Share to TwitterShare to FacebookShare to Pinterest
Labels: wanker of the day