"When the rich wage war, it's the poor who die"

"If a free society cannot help the many who are poor, it cannot save the few who are rich."  ~John F. Kennedy


This is a must-read op-ed at Bloomberg, written by a man who founded many companies and last year raked in an eight-figure income (on which he only paid 11% in taxes).

I think he knows whereof he speaks.

Even so, I’ve never been a “job creator.” I can start a business based on a great idea, and initially hire dozens or hundreds of people. But if no one can afford to buy what I have to sell, my business will soon fail and all those jobs will evaporate.


That’s why I can say with confidence that rich people don’t create jobs, nor do businesses, large or small. What does lead to more employment is the feedback loop between customers and businesses. And only consumers can set in motion a virtuous cycle that allows companies to survive and thrive and business owners to hire. An ordinary middle-class consumer is far more of a job creator than I ever have been or ever will be.

This is why it's so stupid when Republicans blather on about "job-killing tax hikes." It's not taxes or the lack thereof that create jobs--it's demand for your widgets, or whatever you happen to be offering. No demand=no business=no jobs. (I'm certain all these small businesses they're so hot on protecting just decided one day that x amount of people in their depressed little towns needed a job, so they just up and hired all these people, regardless of whether they thought anyone would actually purchase what the employees were selling. Suuuuure.)

I don't know why Mitch McConnell and his merry band of Nazguls in Congress continue to cling to this ridiculous myth. I suppose it's all of a piece with their sticking to their story of trickle-down economics and denying climate change. They're so terrified that their patently false way of life might have to change that they'll hang on to it to the bitter end, irregardless of common sense or facts.

It is mathematically impossible to invest enough in our economy and our country to sustain the middle class (our customers) without taxing the top 1 percent at reasonable levels again. Shifting the burden from the 99 percent to the 1 percent is the surest and best way to get our consumer-based economy rolling again.


Significant tax increases on the about $1.5 trillion in collective income of those of us in the top 1 percent could create hundreds of billions of dollars to invest in our economy, rather than letting it pile up in a few bank accounts like a huge clot in our nation’s economic circulatory system.

No matter how much you jump up and down and throw a hissy fit, math is still math. Remember the 1950's? That wondrous decade all these traditional types look back on as the nadir of American society (at least for white Christian males)?

What were the tax rates then, pray tell? 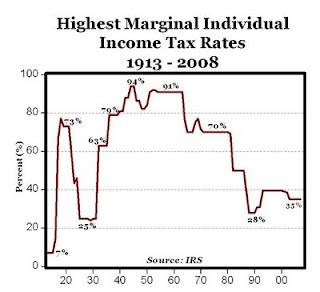 Admittedly these are marginal tax rates. The actual tax rate paid, with loopholes and deductions and such, was probably around 50%.

Nevertheless, the country didn't crash and burn, now did it? With the way the Republican Nazguls are screaming, you'd think President Obama is wielding the One Ring and dragging them back to Mount Doom.

One Tax to rule them all,
One Tax to find them,
One Tax to bring them all and in the darkness bind them
In the land of Socialists where the Kenyans lie.

(back to article) So let’s give a break to the true job creators. Let’s tax the rich like we once did and use that money to spur growth by putting purchasing power back in the hands of the middle class. And let’s remember that capitalists without customers are out of business.

And capitalism without proper taxation is the country we have today--a godawful, unequal, top-heavy mess.