Here's a larger version of this graph, found at the New York Times. You'll probably have to go there to see it fully. 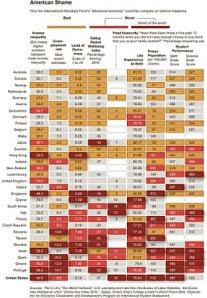 The subtitle to the graph is "How the International Monetary Fund's "Advanced economy" countries compare on various measures."

America is at the bottom of the list. Six of nine rankings are "worst" or "worst of the worst." The categories include: income inequality, unemployment rate, food insecurity, life expectancy at birth, prison population and student performance (math).

Obviously, some of this has resulted from the recession. But a lot of it can be seen as a direct result of Republican policies, starting with Saint Ronnie.

You get what you pay for, after all. Or don't, in this case. It should be clear (but isn't, thanks to Fake Noise) that elections have consequences, and the Reptiles/Teatwits who are doing their best to run this country into the ground won't be satisfied until we're a Third World, polluted, poverty-stricken nation.

Email ThisBlogThis!Share to TwitterShare to FacebookShare to Pinterest
Labels: "the poor will always be with you", politics, the Republican apocalypse