The Woman In Me

Now for something new and different, here's a bit of television fluffery.

I watched this on Wednesday, and I'm still not quite sure what to make of it. I will say I'll watch it again, and see if the next few episodes find it settling into some kind of groove. I remember the original show with Lindsay Wagner (most notably the cheesy special effects, such as super-slo-mo standing in for 60 mph, and an angry-rattlesnake sound effect whenever she'd go "bionica") and as with everything, sometimes the updating leaves a bit to be desired.

Michelle Ryan seems to be a competent actor, but unfortunately not outstanding. That honor goes to Katee Sackhoff, definitely one of my favorite actors, who brought her electrifying badass persona from "Battlestar Galactica" over here. Her character, Sarah Corvis, is the most interesting one of the bunch, and I can't help but wish she was the new Jaime. I don't think Katee would've been crying "I'm pregnant" to her boyfriend--who looks uncannily like Wayne Gretzky--and driving into the night tossing around names without even mentioning the possibility of abortion. (This was the weakest part of the entire show, smacking of some holy motherhood manipulation for no reason. Naturally, Jaime loses the baby after her accident. Why was it even mentioned, then? It certainly didn't advance the plot.)

Talking about the accident, that was unrealistic to say the least. The car gets T-boned by an eighteen-wheeler, thrown ass over teakettle umpteen times, slams into a light pole, and the boyfriend emerges with a cut forehead and cheek and is even well enough to perform the operation on Jaime? Come on now!!! Both of them should have been killed. But then we wouldn't have a program, would we? (Of course, then Katee Sackhoff could have been the star of the show...) I hate it when kewl special effects get in the way of real-world logic.

I haven't watched a great deal of TV for the past few years, so the extremely minimalist dialogue surprised me. I really had to concentrate on what they were saying, because if I missed one line an important bit of information would go by the wayside. This had the effect of ratcheting up the pacing to a jittery, sometimes schizophrenic level. It fit in well with the final climactic fight between Jaime and Sarah, but the few supposedly "reflective" moments seemed ill-fitting and shoehorned in. I hope they get a chance to slow down a bit in future episodes. A lot of plot threads were thrown down in this episode, and I'll have to see if they can keep track of them all.

And, of course, keep an eye out for Sarah Corvis. Yea Katee! 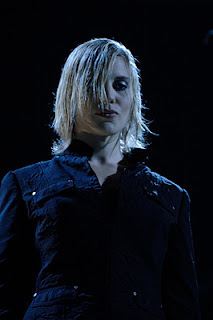