I try not to get caught up in the creation/evolution wars, because I don't see any sense in beating my head against a brick wall. East is East and West is West and never the twain shall meet. In other words, it's almost impossible to have a reasonable discussion without each side's acknowledging the possibility the other may be right. A creationist/intelligent design advocate may do this to some extent, but the evolutionist/naturalist will never reciprocate.

Having said that, I can't resist sharing this quote from this wonderful book I'm reading: 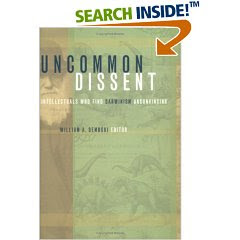 "First and most generally, the theory of evolution can be viewed as a form of the question-begging fallacy. It demands an initial acceptance of the doctrine of naturalism before any explanation is offered. Specifically, when the biologist is faced with the fact of the enormous differentiation and specialization in nature, he says that these were caused by the proximate method which nature would use, assuming that nature is the only creative force that exists. For example, it is admitted by biologists that complete empirical data for the descent of man from the lower animals is missing. The problem then becomes how to fit into a scheme where nothing is allowed to appear except through natural causation. Thus it is reasoned that if man possesses the largest brain found in nature, it is because it must have been utilitarian for him to develop a large brain. But how can this be proved except by reference to the a priori postulate that nothing develops except through organic need? Again and again in the literature of evolution one finds that things are viewed as "necessary" because they come from this assumed natural cause rather than as proved because they come from a known cause. In other words the fact that things have come into being is used as evidence that nature must have used the evolutionary process to bring them into being. I submit that this reasoning does not prove evolution a fact: it rather assumes that evolution is a fact and then uses it as both cause and effect in describing the phenomena of nature." (Richard Weaver, quoted on pp. 14-15)

To me, this makes a lot of sense. It starts with one great big assumption and goes on from there.

Assumption #1: There is no God.
Assumption #2: Re #1, evolution is the only possible way for life to arise.
Assumption #3: Re #2, everything therefore evolved, and (dubious) theories are created accordingly.

When I see this house of cards, I am reminded of the old adage: Assumptions make an ass out of you and me.
Posted by Unknown on 6/29/2007

I think the biggest problem with the whole "debate" is that both "sides" seem to start with the ASSumption that God and evolution are mutually exclusive.. which is really only a tenable position for the absolutist on either end...